OABench 2.0 is a second-generation suite of benchmarks that allows the user to approximate the performance of processors in printers, plotters, and other office automation systems that handle text and image processing tasks. Compared to OABench 1.1, it includes new Ghostscript and Bezier benchmarks as well as new datasets and self-checking features. Even if you’re not working on a printer or image processing application, the demanding workload provided by OABench 2.0 will stress processors at all levels.

Its five benchmark kernels include the following:

Benchmarks the classic Bezier curve algorithm by interpolating a set of points defined by the four points of a Bezier curve.

Provides an indication of the potential performance of an embedded processor running a PostScript printer engine. OABench 2.0 can be run with or without this benchmark.

The benchmark uses a bitmap rotation algorithm to perform a clockwise 90° rotation on a binary image.

The benchmark parses Boolean expressions made up of text strings and tests bit manipulation, comparison, and indirect reference capabilities to test the potential performance of a printer interpretive control language.

You can view historical scores for OABench. 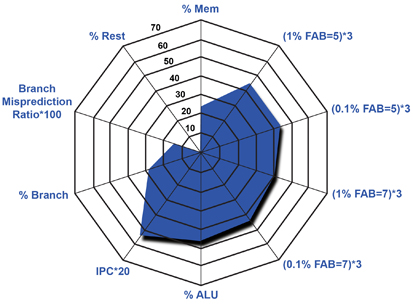 You can learn more about the components in the OABench 2.0 Data Book.