The suite’s seven benchmark kernels are the following:

The correct processing of Internet Protocol (IP) packets, whether forwarding them to another router or processing and sending them to a local machine, is a fundamental part of a network router’s workload. The first step is to validate the IP header information of all packets. The RFC1812 standard defines the requirements for packet checks carried out by IP routers, and EEMBC created its Packet Check benchmark to model a subset of the IP header validation work specified in that standard.

Packets are often fragmented before being transmitted over the Internet from one part of the network to another, and then reassembled upon arrival. Measuring a processor’s performance in reconstructing these disjointed packages is the role of the IP Reassembly benchmark.

Follows NAT rules to rewrite the IP addresses and port numbers of packets based on pre-defined NAT rules. Because rewriting each packet modifies its source IP address and port chosen by the algorithm, the NAT benchmark simulates an important part of network processing for many router designs.

Receives and forwards IP packets using a mechanism commonly applied to commercial network routers. It employs a data structure known as the Patricia Tree, a compact binary tree that allows fast and efficient searches with long or unbounded length strings. The benchmark monitors the processor’s ability to check the tree for the presence of a valid route and walk through the tree to find the destination node to which to forward the packet.

Implements the Dijkstra shortest path first algorithm, which is widely used in routers and other networking equipment.

As use of the Internet continues to evolve, so too does the data transmitted over it. Voice, video, and multimedia presentations provide a greater challenge than simple text and files because their timing and order are critical. Data transfer and error rates suitable to support such applications are measured by Quality of Service (QoS) processing. Bandwidth management software “shapes” traffic flows to meet QoS requirements, and EEMBC’s QoS benchmark simulates that processing.

Comprised of three components, EEMBC’s TCP benchmark is designed to reflect performance in three different network scenarios. The first component, Gigabit Ethernet (“TCP Jumbo”), represents the likely workload of Internet backbone equipment using large packet transfers. The second (“TCP Bulk”) takes the form of a standard Ethernet network, concentrating on large transfers of packets using protocols such as FTP. The last component (“TCP Mixed”) also uses a standard Ethernet network model, but focuses on the relay of mixed traffic types, including Telnet, FTP, and HTTP. The benchmark processes all of the packet queues through a server task, network channel, and client task. Simulating the data transfers through the connections reveals how the processor will realistically cope with various forms of TCP-based traffic.

You can learn more about the components in the Networking Data Book.

You can view historical scores for Networking 1.0 and 2.0. 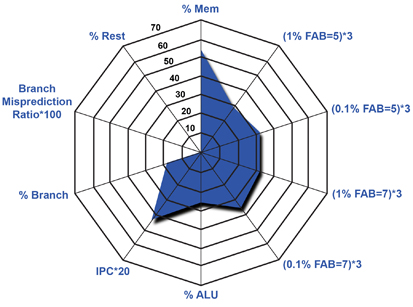 Note: This website only works on browsers that support ES6, such as Edge, Chrome, Firefox, Safari; IE11 and earlier are not supported.