DENBench Version 1.0 is a suite of benchmarks that allows users to approximate the performance of processor subsystems in multimedia tasks such as image, video, and audio file compression and decompression. Other benchmarks in the suite focus on encryption and decryption algorithms commonly used in digital rights management (DRM) and eCommerce applications. Addressing such end products as smartphones, MP3 players, digital cameras, TV set-top boxes, and in-car entertainment systems. DENBench Version 1.0 expands on EEMBC’s ConsumerBench Version 1.1 with new benchmark kernels and a larger number of datasets. Several mechanisms, including Peak Signal-to-Noise Ratio (PSNR), check output quality. The DENBench components include the following algorithms and mini-suites:

JPEG and color-space-conversion tests, including JPEG compress, JPEG decompress, RGB to YIQ, RGB to CMYK, and RGB to HPG. Each of these is applied to seven different datasets for a total of 35 results.

The DENmark™, MPEG Decodemark™, MPEG Encodemark™, Cryptomark™, and Imagemark™ are single-number scores that EEMBC provides, in addition to scores based on individual benchmark applications within its DENbench suite, to enhance the presentation of comparative data on processor performance. These numbers are intended to provide a first-order representation of processor performance in tasks related to digital entertainment applications. The detailed scores on individual benchmarks and datasets will continue to offer the highest value to system designers, allowing comparison of the individual applications that are specific to their designs. The overall DENmark score provides a single-number performance rating for the entire DENbench suite. All 69 tests in the suite must be run to derive a DENmark score. View certified DENBench Version 1.0 benchmark scores. 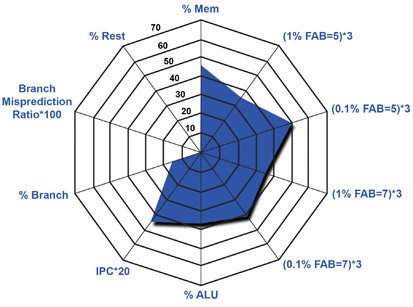 You can learn more about the components in the DENBench Data Book.